Beyla is a 4 year old girl that has had a rough life so far. She needs a final forever home where she can just sprawl out and be happy.

She is a nice sized girl at about 90 pounds. She has some basic training, and house trained but have had an accident because we are switching foods. At about 3 years old she came into another rescue with 2 other Berners from an Amish puppymill. She was missing her left eye. It was injured on a wire sticking out of her crate and got infected. It then had to be removed. Then she went to a home for 15 months until her new owner decided she did not have time for her, becuase her job called for her to do a lot of traveling, so she placed her on petfinder classifieds.

From there she went to another home where she was fully vetted andthey shaved her due to mats. In this home she showed some separation issues and fear of thunder. She was also intensely interested in cats. The first owner did not see any of the anxiety issues in her home.the next home decided that she was not a good fit after trying for 3 weeks, our rescue was contacted. We took her that day.

Beyla has been here over 2weeks and we have not seen any of the anxiety issues. In the 2nd home she was confined at time in the laundry room with their other dog. She was not happy not being part of the family. We have allowed her run of the house, and she does not seem to care as long as she has the company of our gang. We had a storm come through and she was sleeping on our bed. She sat up, but we petted her and she laid back down and went to sleep. She is on a very low dose of anxiety meds which we will continue for the 6 weeks and then ween her off to see if it makes a difference.

We don’t see the issues and don’t know if it was the home or the meds. Beyla needs a home with other dogs, and we think Berners she seems more relaxed around as she recalls the safety of the time at the puppymill. She would do best in a home where people are around alot like a retired family or someone that works from the home. She will require an above ground fenced yard due to the possible storm issues and we don’t want her running off in a fearful state. With just the one eye she has a great chance of getting hit.

She also can not go with a home with cats. She will injure, and has injured a cat due to a high prey drive. So no small animals. She did spend time with some smaller dogs but for safety to them we recommend no small dogs. She is good with children of all ages.

Beyla has not shown any of the supposed issues in the 3 weeks she has been here. She just needs a home where she will be a full part of the family. We had storms roll through the other night and she was between us on the bed with all 4 feet in the air and snoring.

5/1/11  She has decided that a couch is preferable over a dog bed and now is constantly lounging in comfort. It’s amazing how dogs from poor situations really seem to appreciate their new homes. 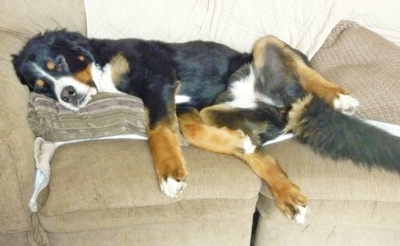