We just took in 2 boys from a shelter that were found as strays. They have been at the shelter for 2 weeks without anyone looking for them. They are both neutered and appear to have been at some point loved and cared for. Although right now they are severely matted, and in need of grooming and vet check ups. They have no names that we know of, so the thin boy were are going to call Eli. He has a slight eye infection. We will have him checked as soon as we can. Both dogs are estimated at about 4-6 years old.

Caleb, seems to maybe have been shown at some point. He “Stacks” himself on the table. Both boys seem accustom to the grooming table, not afraid of the blow dryer, and wanted their baths! They are gentle with treats. Everything else is unknown, but seem to have nice temperaments and are friendly. they are eating up the attention they are getting. Our opinion is that they were part of a family at some point, but have been neglected for a while.

Both boys are doing great 1 day later. Eli has

heart worms, we are waiting for Caleb’s to come back. Both these boys seem to be exceptional in personality. They accept everything being done to them. Eli is not feeling to well and likes to sleep, but has bouts of puppyness. Caleb I am told is just a “goof” very funny and playful. We will be bringing them to our main foster home Saturday 6/26 and continue their vet care and evaluation.

We are wondering if these dogs are not retired show dogs that were placed or the owner fell into hard times. At some point thse dogs were well cared for, and have fallen into neglect.

Update 6/27The latest update is that both Eli and Caleb have heartworms. Eli also has bronchitis, a bladder infection, both are anemic, have at least 2 typs of worms, and underweight. Eli is more towards emaciation. Both are being wormed, received frontline and Eli is on antibiotics. Eli is not eating well but we have been getting canned food in him sometimes. Hopefully, when we get rid of their worms and some weight on them, we can then pursue their heartworm treatments.  You can see Eli on UTube at http://www.youtube.com/watch?v=JYgscsyz0cE

The boys are doing better, they are eating pretty well, especially Eli. They received Interceptor to kill off the baby heartworms which knocked them down a bit. It really took some of Caleb’s appetite. We started giving Eli something for pain to see if it would improve his mobility, and it has greatly. He is getting up on his own and wandering around the yard for the first time. So hopefully we are seeing just bad hips rather than a neurological issue. They are putting on weight and their personalities are coming out more. Caleb will bounce around and want to play but he has to be kept quiet because of the heartworm treatment. We hope to start his full treatment soon once he is eating regularly. 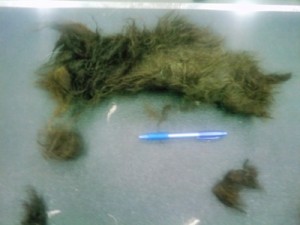 One of Eli’s mats, the blue thing is a pen for size ratio 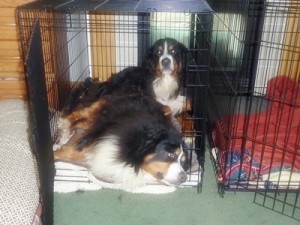 So far things seem to be going very well. We think our show dog potential may be incorrect. We think they stood on the tables because they were so sick. Caleb does good when we work on him but Eli hates the trimmers

They are going to get their 2nd worming this weekend. I’m sure that is one reason they feel better, getting rid of all those worms. They are starting to play and pick up toys, Eli will take them back to his crate and squeak them.

We think Eli is the leader and Caleb follows his lead. Caleb will not get up if called but if Eli goes, then he is right behind time out of the crates. They sometimes even get in the same crate. They love their crates and we think that they think they belong there. So we have to work on letting them know it is OK to spend time interactacting.

We are planning to do Caleb’s heartworm treatment this weekend if all goes to plan. They are starting to want to play and putting on weight. The boys are doing much better, eating regularly and seem happy.

Caleb got his first HW shot and it really whipped him out. We did not do the 2nd as the first made hims so sick. He will get the shot again in a month. He stopped eating and felt like crap. He is responding much better now and has begun to eat again. Eli is doing very well and is wanting to play now.

The boy will be going to their new home the first weekend in August. They will be living near Kansas City KS.