UPDATE: 1/22/13       GUNNY IS READY FOR HIS NEW HOME! He has done well here over the last few weeks. He loves our Golden and get along with most of the dogs. He is posturing a little with our Alpha boy. He does get possessive sometimes for our attention. He wants all the attention he can get. he likes to cuddle and will lay on our lap. He had discovered several toys he likes and will toss them around. he loves roaming the fenced yard, so I promised him (I know it sounds weird) a fenced yard so he he can roam all he wants. I can’s test him with children but we don’t see him acting out aggressively, but caution will need to be supervised for a while with small children. I busy household may make him nervous. He has adapted very nicely to his crate. He may get bored with daily long term crating but 4-5 hours would not be a problem. He reportedly would sometimes pee in the house, but not once here in 15 days. 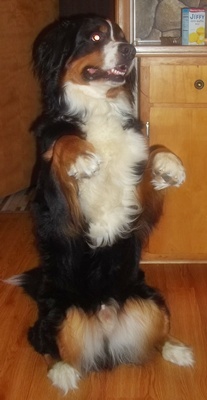 I’m cute, but have a dark side

Gunner is 2 years old, still intact but will be neutered prior to placement. He is being re-homed due to he is getting more possessive about his ome. Basically he needs obedience training and socialization. He has not had much of either. He can sit, lay down, and several other commands but needs leash and recall work.

Because of his lack of experiences he puts on the brakes when going places sometimes, like to the vets. He has shown aggression/defensiveness to get his way which again is a sign of needing more experiences. He jumps on people when entering the house so he was gated off where he then gets defensive and nipped someone over the holidays. He did not break the skin but gave a nice bruise to some fingers. Due to this he will need a fenced yard and a home with fewer visitors. He will need a committed owner that will be willing to show him that the world is not scary. Gunny loves the water but not boat rides. He likes small dogs but we are not sure about larger ones. He is not yet in foster and is due to arrive on Sunday, 1/6/13, so we will know more once he arrives. He was hit by a car when he was young but shows no adverse reactions and likes care rides but not being left alone in the car. He is very loving to his family.
Our initial impression is that he neeeds a home where he can have room to approach at his own pace and learn some control on greetings.