. It took 5 months but since we split Bunson off, I called Patty nothern Michigan because she had considered both but decided that Bunson was too much and since they had two Berners already, 4 was too many. So that left that 3 might be a possibility! 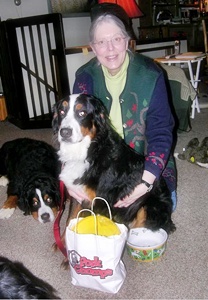 So I called Patty and Brad, they jumped and the prospect of having another girl. They adopted Brooke from a shelter in Cheboygan last fall. She is an older girl and has come down with cancer after just a few months of having a new, perfect life. Their other girl Skye is just 2 and needs a playmate, she fit the bill as the outgoing example we needed. Enter Trina!

I took Trina there yesterday. I’m not saying it is a perfect home, but I wanted them to adopt me! They have a beautiful home deep in the woods with a nice sized fenced area overlooking a private lake.

By the way, did I mention that they have 600 acres across the street! With its own lake, and its own resident pair of nesting Bald Eagles! Now she will be able to go on several walks a day through the woods undisturbed. Patty is married to Brad; both are retired with few visitors. Taylor made for “Bina”. I have already received several updates within 36 hours and Trina is sitting on her feet at the computer. It took several weeks for her to join either one of us here. Her relationship with Brad is a work in progress, and should show results very soon.